Keaney not bothered if tipsters writing off Dubs

Conal Keaney fully expects Dublin to be written off this week ahead of their Leinster semi-final replay with Kilkenny — and he doesn’t mind it one bit. 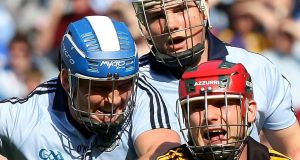 While unhappy not to have held their one-point lead in the dying moments of Sunday’s thrilling draw, the former dual player took plenty of positives from the game.

After an 18-point defeat to Kilkenny last year, Sunday’s performance was almost a complete turnaround though he expects Kilkenny will be fancied to the hilt to make amends in Portlaoise next Saturday.

“This year, there was no talk about it, we were coming in under the radar and that’s the way we wanted it. It’ll be the same again next week,

“I’m sure they’ll have Henry (Shefflin) back and Michael Fennelly and all the greats, the backlash from Kilkenny and ‘you only get one chance (against them)’ and all this kind of stuff but we’re still in the Championship and we’re going to give it another crack next Saturday.”

“It’s a great position to be in, we’re still in the Championship, we’re improving with every game and I think that game will stand to us.

“The lads that came on were great and it just shows the strength in depth we have and we can afford to take off lads who aren’t playing too well and lads can come on and do the business.”

Dublin finished Sunday’s game stronger and Keaney puts that down to the fitness work they’ve been doing under former Tipperary trainer Ross Dunphy.

He isn’t concerned that they must face a fifth game in as many weeks the weekend after next, regardless of what happens in the replay.

Meanwhile, the Leinster Council have announced ticket prices for the game have been cut to €20 for adults in the stand, €10 terrace and free admission to the terraces for children under the age of 16.