LUCAN SARSFIELDS QUALIFIED for their first ever Dublin senior hurling final with a four-point win against Craobh Chiaráin in tonight’s semi-final clash at Parnell Park.

With Dublin seniors Peter Kelly and Johnny McCaffrey both impressing, it was a deserved success for Lucan Sarsfields against a Craobh Chiaráin side who finished with 14 men after full-back Eugene Farrell was shown a second yellow card.

Lucan Sarsfields had got off to a splendid start and were six points clear, 1-6 to 0-3, by the 13th minute. They were inspired by their two corner-forwards with Paddy Ward cleverly finishing to the net in the 6th minute while Aidan Roche picked off some lovely points.

Centre-forward Chris Crummey also showed up well and his 21st minute point sent them into a 1-8 to 0-4 advantage. But Craobh Chiaráin kept in touch and Alan McCrabbe hit the final point of the half to see them trail by 1-8 to 0-5 at the interval.

Craobh Chiaráin powered back into contention after the break with midfielder Robbie Mahon leading the way and his superb strike to the net in the 35th minute left them only two points adrift. Tommy Somers and McCrabbe traded points but then Farrell was dismissed.

That was a serious setback for Craobh Chiaráin and though they fought until the finish, they could now claw Lucan Sarsfields back. Substitute Kevin O’Reilly hit some important points and McCaffrey grabbed another to seal Lucan’s triumph. 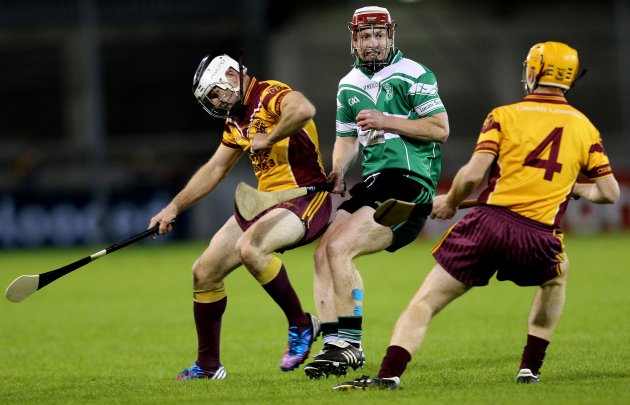