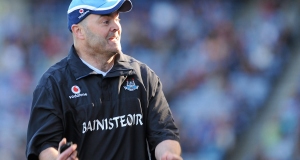 Pick yourself up, dust yourself down, get back in the game — that was the attitude of Dublin manager Anthony Daly after his side went from champions to being relegated in a season with Saturday’s loss to Galway in Portlaoise.

“We have to move on now from this, no choice anyway,” he said.

“They’re back with the clubs now, two rounds of the championship, that won’t do them any harm. There’s nothing like playing to lift the spirits and it will do them good. We have a challenge against Limerick next week, maybe have a look at a few more lads.

“We need to cut a few from the panel now — we were under pressure all along with injuries and suspensions but all the lads [Stephen Hiney, Tomas Brady, Conal Keaney] are coming on. We’re hoping now they’ll get in a few club championship games. That’s the plan and hopefully they’ll come through that. We have to settle on a championship panel now and have a cut again.”

“I suppose we’re a bit unlucky to be going down based on our performances through the league but we can’t really argue either because we failed to win a game. You’ve got to be clinical at this level, we weren’t today, they were and punished us very badly.

“I think anyone who was here would accept it wasn’t as lopsided a game as the score would suggest. They took their chances. We didn’t. You think of all the one-on-one chances we had, two-on-one, didn’t convert any of them.

“They got a 20-metre free in the first half probably against the run of play, a soft enough shot that sneaked in. A mistake then to give them another goal, and when the fourth goal came the match was over. They were more clinical, in fairness to Canning when he got the chances he buried them. ”

Championship or bust then for Dublin?

“No it’s not. There won’t be any bust. Dublin hurling is a very strong position now. The thing now is to keep going, keep driving on.”
Irish Examiner