Three first half goals and a scoring surge at the start of the second half saw Dublin to victory in Sunday’s Walsh Cup clash at Parnell Park.

The Dubs face Laois at the same Donnycarney venue this coming Thursday night (7.45) with the prize of a semi-final slot against Galway up for grabs.

Dublin led 3-8 to 0-12 at half-time, the goals coming from Eamonn Dillon (two) and Donal Burke, before they hit seven points in-a-row to extend their advantage to 12 points, 3-15 to 0-12, and the outcome was beyond doubt.

Mark Schutte hit two of these points as did Lorcan McMullan and Oisín O’Rorke (one free) with Fergal Whitely converting a long range opportunity to see Dublin out of sight. 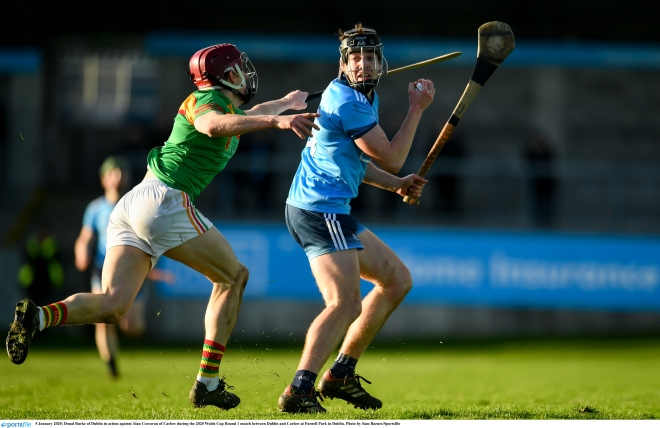 Those first half goals gave Dublin a five-point cushion at the breakdespite Carlow hitting eight points in-a-row at one stage of the opening period.

Two of those goals came in immediate succession, both from Eamonn Dillon, to propel Mattie Kenny’s men into a 2-1 to 0-3 lead by the 11th minute.

The Barrowsiders had started the better to lead 0-3 to 0-1 inside five minutes but Dillon’s brace saw the momentum turn temporarily Dublin’s way.

But then Carlow rallied significantly to hit eight points without reply, including four frees and a ‘65’, to make it 2-6 to 0-11 by the 31st minute.

Dublin snapped to life before the interval with a Mark Schutte point before Donal Burke hit Dublin’s third goal, after being placed by the influential Ronan Hayes, and before the break Oisín O’Rorke added a point to make it 3-8 to 0-12.