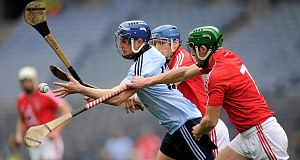 Cork left Croke Park with their second Allianz HL Division 1A victory yesterday, a win that looked unlikely in a game which Dublin dominated for long periods.

However, the introduction of several young players in the second-half stiffened the visitors’ challenge and got them over the line. Dublin had a last-gasp chance to equalise but Paul Ryan’s difficult free drifted just wide of the posts.

“It was difficult but I thought he’d point it,” said Cork boss Jimmy Barry-Murphy afterwards.

“He’s an excellent free-taker but it was a difficult angle, in fairness. I was well pleased to see it going wide. I wouldn’t have had any cribs with a draw at that stage. I certainly would have settled for that with ten minutes to go. Delighted overall that we sneaked it.”

A fair description. Dublin had improved steadily through the game – they managed just one point, from Ryan, and seven wides in the opening quarter, a period when Cork were far more efficient, with four points from Pa Cronin, Ben O’Connor, Patrick Horgan (free) and Patrick Cronin.

Simon Lambert took a clever hand pass from David Treacy on 20 minutes and shot for goal, only for Donal Óg Cusack to tip his effort over the bar for Dublin’s second point.

That galvanised the home team to a run of three more points, two from Paul Ryan (one a 65) and a long-range effort from Joey Boland, making it five points apiece, while it was Cork’s turn to rack up the wides, collecting five in ten minutes.

In the closing stages of the half Dublin had points from Ryan(another 65) and Johnny McCaffrey while Paudie O’Sullivan had two in response for Cork, with Conor Lehane, the star of their game with Waterford, chipping in with two late points to make it 0-9 to 0-7 at the half in favour of the visitors.

The game wasn’t long livening up: a minute into the second-half dithering on the wing by Cork left Simon Lambert through for a goal, only for Cathal Naughton to respond instantly with a Cork goal. Dublin drove on, however, and when Liam Rushe won a penalty, Paul Ryan’s shot was saved, only for Ryan O’Dwyer to finish smartly – 2-9 to 1-10 on 40 minutes.

Dublin then hit six points, with the impressive Danny Sutcliffe hitting three; Cork were relying on Patrick Horgan’s accuracy from frees to stay in touch, but Dublin looked strong enough to keep them at bay, with Joey Boland and Paul Schutte ensuring the Leesiders couldn’t gain parity up front.

Two Ryan points, one from a free, made it 2-16 to 1-16 with five |minutes left and Dublin looking good when Cork attacked through the middle of the field – Sean Óg Ó hAilpín and Darren Sweetnam combined, then Paudie O’Sullivan and sub Jamie Coughlan worked a one-on-one for the latter with Dublin ’keeper Gary Maguire.

Coughlan kept his head and slipped the ball across to Cronin, who knocked it home for a score that rocked Dublin.

“A real Cork goal,” said Daly, “If I can say that as a Clare man – we seemed to have the run of play at the time but didn’t take our chances.”

In a nervy ending Sutcliffe – again — edged the Dubs ahead, only for another Cork sub, William Egan, to hit a fine leveller from long range. Lehane won a vital free as the clock ticked to 70 minutes and Horgan converted, then Ryan’s late free tailed wide.

Barry-Murphy was quick to pay tribute to the young players introduced in the second half. Darren Sweetnam added drive at midfield and won possession, Egan hit a fine point and shut down Dublin’s last attack, while Lorcan McLoughlin won a vital ball near the end.

“We’ve said from the start we wanted to bring young players in to see if they can make the jump to inter-county,” said Barry-Murphy. “It’s a big step up, and I thought the subs did very well when they came in.

“Now it’s Galway, Kilkenny and Tipperary, it doesn’t get any tougher, but momentum is a great thing and I think the players will learn a lot from today.”