Tipperary 4-20 Dublin 0-17
Tipperary took Sam Goldwyn’s old advice yesterday, beginning with an earthquake and building to a climax, as they disposed of Dublin in the Allianz HL 1A semi-final with brisk efficiency at Semple Stadium. 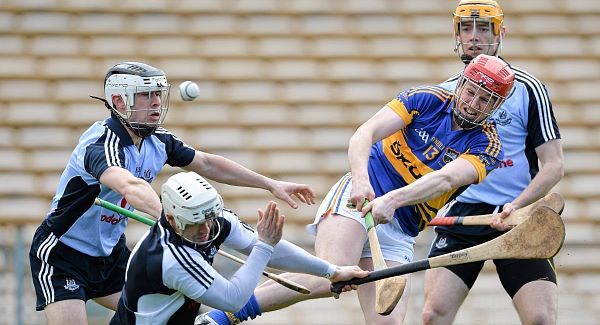 The game never really came to life, thanks to Tipp’s early goals smothering the opposition. The men in blue and gold were backed by the wind for the first half and they prosecuted their case with extreme prejudice.

Dublin conceded early and often and were always struggling for a toehold.

They opened the scoring with a David Treacy free, but Tipp then took a stranglehold on matters, with Noel McGrath dominating midfield. He dropped a second-minute free in around the house and Shane Bourke fielded the ball before goaling from close range.

Jason Forde, Noel McGrath (free) and Seamus Callanan added points before Tipp added a second goal on nine minutes; Pa Bourke was half-blocked and Patrick ‘Bonner’ Maher collected the loose ball, belying his reputation as a forager to advance and finish cleverly just as he lost his footing: 2-3 to 0-1 and not 10 minutes gone.

Poor shooting didn’t help Dublin, as they struggled to come to terms with the tricky breeze. Danny Sutcliffe raised a white flag from range on 12 minutes. Alan Nolan saved well from Pa Bourke soon afterwards, though Bourke pointed the resulting 65.

With Padraic Maher dominant at centre-back – where he started, notwithstanding his number three jersey – and Noel McGrath relaying plenty ball, Dublin were under huge pressure, and the home side kept the scoreboard ticking over through Shane Bourke and Callanan (free).

Dubs boss Anthony Daly sprang Paul Ryan from the bench on 20 minutes, and the men from the capital responded, hitting four points – Sutcliffe (two), Treacy and a Ryan free.

Tipp answered through a Callanan free and a Jason Forde sideline, however, making it 2-10 to 0-6 on 30 minutes.

Callanan added another point before Shane Bourke won a penalty on 32 minutes; Callanan duly stitched it into the rigging: goal.

Though David O’Callaghan had two late points, the scoreline at the break was emphatic: 3-11 to 0-8.

Dublin improved and reduced the deficit to nine thanks to Ryan, Shane Durkin and Conal Keaney points by the 50th minute, but Callanan (two) Pa Bourke (two) and Forde replied to stifle the comeback – 3-20 to 0-15 by the 56th minute.

Dublin didn’t give up but the goals they needed never came, and the game wound down to its foregone conclusion. Tipp sub Mikey Heffernan’s injury-time goal was the final indignity for Dublin.

Afterwards Tipperary manager Eamon O’Shea wasn’t biting when invited to discuss whether Dublin were suffering the after-effects of their stint in the second tier: “I’m just happy that we did that (won), though we got a good start and it shows the benefits of being in the first division, I think, getting competitive games.

“I wouldn’t be entirely happy with everything that went on there but we’ve been training really well for the last eight weeks or so. You just look at it as a manager and think can you bring your training form onto the game.

“And the pleasing thing is that we’re evolving into being able to do that a bit. I would caution everybody – it’s still very early in the season yet.”

Down the corridor Anthony Daly didn’t mince his words.

“I’m disappointed,” said the Dublin manager. “We stood off and if you stand off those lads you will be punished. We would have done a heavy couple of weeks training but . . . it’s hard to put your finger on it now after watching that. You could be pointing to the difference between division 1 and division 2 and these things, but the basics of going to the ball go out and trust yourself and go to it and if you make a mistake, so what, but if you give Tipp lads three and four yards going out to the ball you will be punished.”